Dead Moon or not, the early part of today looks busy — especially in the wee hours while you were sleeping. First the sensitive Cancer Moon met up with Mercury and Mars – then opposed Pluto at 4:10AM ET. A need for emotional security is given the potential for expressive communication and action, followed by a catharsis or power play. How wild  and intense were your dreams?

At 10:08AM ET Mars (action) is opposed by Pluto (underground, underworld), suggesting more than the average amount of force and persuasion. At 7:38PM ET mental Mercury takes no prisoners when it is also opposed by Pluto. An empowered perspective or a verbal lashing may be yours, especially if you have a planet or angle around 14 degrees (halfway through) Aries, Libra, Capricorn and Cancer.

The Moon functions well in Cancer, the sign it rules. Here it seeks to fulfill a need for emotional/homeland security Y’know, core foundational concerns. Are you standing on solid ground? Where is your home? Tell me about your family, your mother, your ancestors. How are you being nourished and nurtured? How are you nurturing others?

We are challenged this month to think deeply about these core foundation concerns.  Don’t like what you’re standing on — or standing for? Sending the wrong message, are you? Then use the penetrating perspective and force of this particular New Moon to change it.

As if on cue, the  daily news digest delivered to my emailbox by the good folks at The Washington Post featured this “BIG IDEA” headline: “A New Conservative Self-Help Manifesto From the Head of the AEI“. Here’s the opening paragraph:

Arthur Brooks, president of the American Enterprise Institute, is positioning his think tank to play a bigger role in 2016, offering more issue briefings and debate preparation for candidates. His new book out this week, “The Conservative Heart,” can be read as a communications manual of sorts. It also prods GOP leaders to outline a conservative social justice agenda. “Forget the scapegoats,” Brooks writes. “When the vast majority of Americans agree that conservatives are not compassionate, the time has come for a little introspection. The central problem is not what others say about us. It is what we say about ourselves.”

The timing of this book’s publication fits perfectly with planetary patterns. Perhaps it motivated the Oklahoma Republican Party to delete its Facebook post comparing food stamp recipients to animals. Ditto for Donald Trump’s tweet with him pictured next to an image of Nazi soldiers.

Interesting to note how another heart caused a stir yesterday — the one seen on Pluto. That planet is named for the Lord of the Underworld — a deity not known for its warm and fuzzy compassion. Who knew? 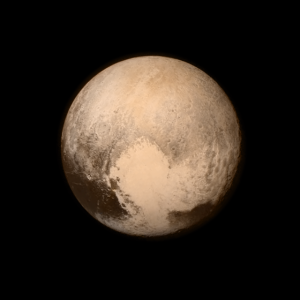 The Sabian Symbol for the New Moon at 24 Cancer seems daunting at first: “a woman and two men on a bit of sunlit land facing south.”  Huh? Thank goodness Blain Bovee wrote a book to help us figure it out: “This is an image of a classic love triangle, the challenge of choosing personal affinities born of the heart“.

Again with the hearts. Must be reflective of Jupiter and Venus nearing the end of Leo, that great-hearted sign.

Bovee suggests that a choice between two perhaps worthy but different options must be made. Consider that Arthur Brooks used to be a “liberal bohemian musician”. What was sacrificed in order for him to be where he is right now?

Bovee suggests we apply this Sabian Symbol with a mind to “the challenge of choosing one’s path in life; finding oneself in triangulated situations; feeling confined in the world; confinement as spiritual freedom; toying with the hearts of others; withholding one’s favor”. And also this: “finding that even the love of God involves a third party”. That one is deep. Have to think about it. Meanwhile, look for headlines reflecting these themes coming soon to a newspaper near you.

You are more personally affected by this potent New Moon if you have a planet or angle at around 24 degrees of Aries, Libra, Capricorn — and especially Cancer. If you do not know the degrees of your planets and angles, consider ordering the Astro-Basics Report here — or book a consultation to find out why you are the way you are, and what opportunities you have to become more empowered in the next several months.

Reflecting the potential for extreme force that transforms one’s perspective of core foundation issues, the wizards at the Giant Atom-Smashing Hadron Collider announced the discovery of a new particle: the pentaquark. Like the Higgs boson, the existence of this particle was first posited on the Uranus-Pluto conjunction in the mid-60s. So cool and apt that it would materialize now, on the Uranus-Pluto square.