Moon enters Cancer at 2:02 AM ET — and eclipses the Cancer Sun at 2:41 AM ET. Until then, we may all feel a sense of listlessness or restlessness — and doubly so, given the wandering malaise of the current void. A few hours ago, I tweeted that this combo suggested “strong potential for a hyped-up event scheduled for tonight to fizzle — rather than sizzle,” and darned if the NYT didn’t include “fizzle” in this headline.  Coincidence or conspiracy?

A New Moon offers an opportunity to set our intentions for the next 28ish days. The eclipse adds potency to seeds that may be planted, and here’s the theory. Solar eclipses act like a “bottleneck” of energy. Light flowing from the Sun is temporarily interrupted, focusing attention on that interrupted point. As light is held back, something new and possibly fragile may enter the picture and grow. And here I would be thinking of Michael, the kindhearted policeman in the storybook Make Way for Ducklings, who stopped the flow of traffic on Beacon Street so Mr. and Mrs. Mallard and their brood of eight could safely make their way to the Boston Public Garden. Otherwise, they would have been roadkill. Got that?

With the Moon in Cancer, the seeds planted involve matters of  emotional and home/homeland security. Y’know, core foundational concerns. Are you standing on solid ground? Where is your home? Tell me about your family, your mother, your ancestors (these days, we reeeaaaally want to know about your ancestors). How are you being nourished and nurtured? How are you nurturing others?

This eclipse is super-significant because it’s happening on a turning point — 0 Cancer. This is also the Aries Point, which means whatever seeds are planted now are destined to attract attention. Read yesterday’s forecast for a review of the significance of the Aries Point.

The last time we had an eclipse on the Aries Point was in June of 2001. That eclipse was activated by Mars in September, right before 9/11. Our world was forever changed (especially in matters of homeland security, a Cancer concern). That’s what eclipses suggest: an accelerated release of a bottleneck of energy that — once released — can’t be put back in the bottle.

Guess how many eclipses at the Aries Point we had between 1900 and 2000? NONE. Zero. Zip. Before the 2001 Aries Point eclipse, the last one we had was on December 22, 1889 — in Capricorn.  Here’s a list of notable historical happenings for the following year — 1890. Capricorn is concerned with taking care of business and making things happen.

One thing that happened was the Oklahoma Territorial Act, which established Oklahoma as a U.S. Territory. I was reminded of this fact in this must-read WaPo piece, “Tulsa’s ugly racial history: from Trail of Tears to deadly 1921 race massacre”. In 1889, Aunt Jemima pancake mix made its debut; in 1893 — still under the influence of that Capricorn eclipse, former slave Nancy Green was hired to portray Aunt Jemima at the Chicago World’s Fair. As of last week, that pancake mix is toast, thanks to a compelling Tik Tok video by Kirby, a singer. A lot can happen in thirty seconds. 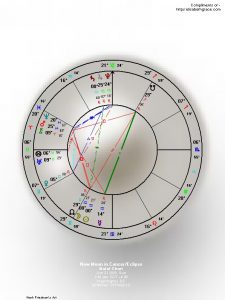 We see the Sun and Moon in the area of the horoscope related to communication, marketing, mindset and short journeys. The two have just separated from the North Node, suggesting an opportunity for growth. New ways of thinking and communication?

The Sun and Moon are not in any major aspect with another planet, though they are quincunx (a minor aspect) Saturn. A quincunx suggests a challenging adjustment. Saturn in this horoscope rules the 10th house — leadership. With Uranus on the Ascendant of the eclipse chart and Pluto on the Midheaven, we have a picture of considerable tension — likely leading to change. It’s interesting that Mercury (thought and communication) and Uranus (change) are also unaspected — and thus likely to command much attention.

The Sabian Symbol for this New Moon — offering clues to what we will be hearing in the news this month — is “a furled and unfurled flag displayed from a vessel.” Sabian Symbol Blaine Bovee suggests we apply this image with a mind to “issues of personal power…power potentials under wraps; bold displays of power.” We are advised to look for “worthy vessels (that) carry vessels to great heights; unworthy vessels that flounder from an inconstant or flagging sense of purpose.”

The area of your horoscope in which this New Moon/eclipse falls is where you is where you may have an opportunity to plant seeds that can create greater emotional security. You are more personally affected by this eclipse if you have a planet or angle around 0 degrees of Cancer and Capricorn — and to some extent, Aries and Libra. Public figures — mostly Cancers —  include: Adam Schiff, Elizabeth Warren, Meryl Streep, Edward Snowden, Prince William, Governor Kate Brown (D-OR), cartoonist Berkeley Breathed, film director Lana Wachowski, Gretchen Carlson, actor Jussie Smolett, comedian Michelle Wolf.

No sleeping in on Monday. Moon will be in Cancer, focused on preserving homeland security — and mostly without speed bumps until the evening. That’s when the Moon opposes Pluto and Jupiter, suggesting its weekly catharsis or power play.

Speaking of power plays, especially ones you hope will fly under the radar under a dead Moon…

…on Friday night, Attorney General William Barr (an apt name if ever there was one) announced the resignation of Geoffrey Berman, the P45-appointed U.S. Attorney for the Southern District of New York. This was a total and complete lie — and it soon backfired, arguably reflecting the communication snafu potential of Mercury Rx — or perhaps the solar eclipse.

Berman soon tweeted that he discovered his “resignation” in a press release, had no intention of resigning and intended to continue to pursue ongoing investigations. By the end of the day yesterday, Barr said P45 had fired Berman. P45 blamed it on Barr (who doesn’t seem to have the authority to dismiss a U.S. Attorney, but whatever). Berman said he would resign, as his deputy Audrey Strauss (who served on Mueller‘s investigation team) would be taking over until the Senate formally confirms a replacement.

It is fascinating to note that Robert Mueller‘s horoscope has a measurement between Venus and Uranus, suggesting a shock, revelation or other upset. It’s exact on June 30th — which is also the date of the second meet-up between Jupiter and Pluto in Capricorn.

Geoffrey Berman was born on September 12, 1958 in Trenton, New Jersey. He has Saturn at 0 Capricorn — thus affected by tonight’s eclipse. We anticipate matters of authority and responsibility becoming prominent. He is expected to be invited to testify before Congress.  If he does, perhaps he’ll tell everyone about the cases the SDNY is investigating — and why Bill Barr would want him to stop doing so.

This is going to be quite a week — as I’ve mentioned before — with no exact aspects between the planets, except from the Moon.

UPDATE: on John Bolton, whose tell-all book was hot in headlines for fifteen minutes — until Friday’s news of AG Bill Barr’s attempted power play. Bolton prevailed in court, as a judge ruled that P45 couldn’t stop the release of his book, but legal experts opine that Bolton may have to forfeit his profits.   Today (6/20), transiting Mars was exactly square Bolton’s natal Mars in boundary-pushing Sagittarius, suggesting an attack. In a few hours, his ordinarily lucky Jupiter-Uranus opposition will be eclipsed, suggesting exciting times ahead (!!). Thus we can appreciate how it came to pass that someone uploaded a pdf of the book to a Google drive — which thousands are RT’ing on Twitter.

Tik Tok is here to stay.

In closing, here are some non-political stories reflecting planetary patterns: 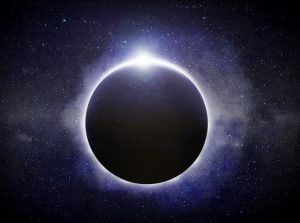